How many times when you’ve been watching a movie have you just wanted to reach out and poke an annoying character? Maybe help a fleeing victim by making them run just a little bit faster? A new interactive experience by production company Tool of North America uses the capabilities of the iPad to allow viewers to do just that as they interact with–and seemingly change the outcome of–live-action video. Part video game, part immersive entertainment, Touching Stories is available today as a free, downloadable app, and we’ve got an exclusive behind-the-scenes video that gives a peek into the process of making it. 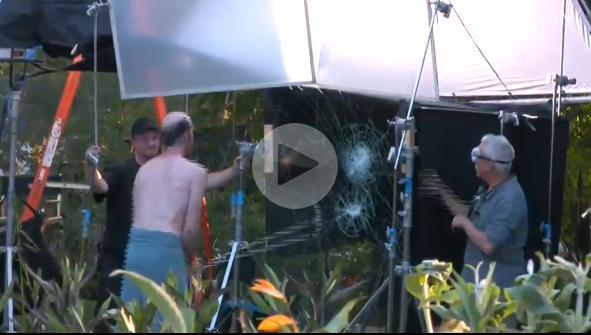 Tool, who create ads and interactive work for brands like MTV and Bud Light, had been tossing around ideas for creating such an experience for the iPhone, but as soon as the iPad was announced they realized the device was made for their concept, says Tool’s digital executive producer Dustin Callif. “Immediately as visual storytellers we got excited because the iPad is such a better device for consuming media than the iPhone–I mean just look at the difference in size with the screen,” he says. “We’ve been looking for the right opportunity to really create customized stories.”

Five of Tool’s directors–Geordie Stephens, Jason Zada and Erich Joiner, Sean Ehringer and Tom Routson–shot four films with interactive points that call for touching, shaking or turning the iPad built into the plots. A partnership with Domani Studios provided the technology to connect the film process with the iPad’s multi-touch and accelerometer features, as well as the ability to load videos or visit Web pages. The result goes far beyond special effects–the team rebuilt each film’s story within the context of the iPad experience.

Last week, Tool used the convergence of advertising’s top players at the Cannes Lions festival to create major buzz around Touching Stories: They delivered iPads pre-loaded with the apps to at least 10 chief creative officers at blue-chip agencies. A smart move, since the experience feels like it’s made for delivering a brand’s hands-on experience to consumers. But the implications for more narrative filmmaking are also important–how will this technology change the face of storytelling?

This week, we’ll have an in-depth look at each film and see how Tool worked closely with Domani Studios to collaborate on this new experience. If you want to try it for yourself, Touching Stories is available in the App Store today. Be careful, though, if you mess with the fate of those characters: Sometimes they strike back.